Hey besties! its been a bit since i have done a Top Ten, however i also have been lacking a bit on my blogging. Still trying to manage the stress in this house to pin point some for you (we have no car right now so that is one of the biggest stresses we are dealing with, My Anxiety – doctor is calling today so hoping to get some help with some new medication and some counselling).

Even with this i am still going strong over on my bookstagram which has been good i mean i got my rep package yesterday from EnchantedExtras and am excited to take photos of them. Literally one of my destressers for sure is to take photos.

But you are here for some bookish content so let’s see which authors i would love to read from AND HOPE TO GET TO THIS YEAR!

Top Ten Tuesday was created by The Broke and the Bookish in June of 2010 and was moved to That Artsy Reader Girl in January of 2018. It was born of a love of lists, a love of books, and a desire to bring bookish friends together.

As a third-year Ph.D. candidate, Olive Smith doesn’t believe in lasting romantic relationships–but her best friend does, and that’s what got her into this situation. Convincing Anh that Olive is dating and well on her way to a happily ever after was always going to take more than hand-wavy Jedi mind tricks: Scientists require proof. So, like any self-respecting biologist, Olive panics and kisses the first man she sees.

That man is none other than Adam Carlsen, a young hotshot professor–and well-known ass. Which is why Olive is positively floored when Stanford’s reigning lab tyrant agrees to keep her charade a secret and be her fake boyfriend. But when a big science conference goes haywire, putting Olive’s career on the Bunsen burner, Adam surprises her again with his unyielding support and even more unyielding… six-pack abs.

Suddenly their little experiment feels dangerously close to combustion. And Olive discovers that the only thing more complicated than a hypothesis on love is putting her own heart under the microscope.

Ever since Margot was born, it’s been just her and her mother, struggling to get along. But that’s not enough for Margot. She wants family. She wants a past. And she may have just found the answer: A photograph, pointing her to a town called Phalene. Only, when Margot gets there, it’s not what she bargained for.

As soon as they see her face, everyone in town knows who Margot belongs to. It’s unmistakable–she’s a Nielsen. And when a mysterious girl who could be Margot’s twin is pulled from a fire, Margot realizes that her mother left Phalene for a reason. But was it to hide her past? Or was it to protect Margot from what’s still there?

The only thing Margot knows for sure is there’s poison in their family tree, and their roots are dug so deeply into Phalene that now that she’s there, she might never escape.

Jayne Baek is barely getting by. She shuffles through fashion school, saddled with a deadbeat boyfriend, clout-chasing friends, and a wretched eating disorder that she’s not fully ready to confront. But that’s New York City, right? At least she isn’t in Texas anymore, and is finally living in a city that feels right for her.

On the other hand, her sister June is dazzlingly rich with a high-flying finance job and a massive apartment. Unlike Jayne, June has never struggled a day in her life. Until she’s diagnosed with uterine cancer.

Suddenly, these estranged sisters who have nothing in common are living together. Because sisterly obligations are kind of important when one of you is dying.

“We were perfect together. Until we met.”

I can’t help but smile at the words in her letter. She misses me.

In fifth grade, my teacher set us up with pen pals from a different school. Thinking I was a girl, with a name like Misha, the other teacher paired me up with her student, Ryen. My teacher, believing Ryen was a boy like me, agreed.

It didn’t take long for us to figure out the mistake. And in no time at all, we were arguing about everything. The best take-out pizza. Android vs. iPhone. Whether or not Eminem is the greatest rapper ever…

And that was the start. For the next seven years, it was us.

Her letters are always on black paper with silver writing. Sometimes there’s one a week or three in a day, but I need them. She’s the only one who keeps me on track, talks me down, and accepts everything I am.

We only had three rules. No social media, no phone numbers, no pictures. We had a good thing going. Why ruin it?

Until I run across a photo of a girl online. Name’s Ryen, loves Gallo’s pizza, and worships her iPhone. What are the chances?

I just don’t expect to hate what I find.

He hasn’t written in three months. Something’s wrong. Did he die? Get arrested? Knowing Misha, neither would be a stretch.

Without him around, I’m going crazy. I need to know someone is listening. It’s my own fault. I should’ve gotten his number or picture or something.

He could be gone forever.

Or right under my nose, and I wouldn’t even know it.

Chloe Brown is a chronically ill computer geek with a goal, a plan, and a list. After almost—but not quite—dying, she’s come up with six directives to help her “Get a Life”, and she’s already completed the first: finally moving out of her glamourous family’s mansion. The next items?

• Enjoy a drunken night out.
• Ride a motorcycle.
• Go camping.
• Have meaningless but thoroughly enjoyable sex.
• Travel the world with nothing but hand luggage.
• And… do something bad.

But it’s not easy being bad, even when you’ve written step-by-step guidelines on how to do it correctly. What Chloe needs is a teacher, and she knows just the man for the job.

Redford ‘Red’ Morgan is a handyman with tattoos, a motorcycle, and more sex appeal than ten-thousand Hollywood heartthrobs. He’s also an artist who paints at night and hides his work in the light of day, which Chloe knows because she spies on him occasionally. Just the teeniest, tiniest bit.

But when she enlists Red in her mission to rebel, she learns things about him that no spy session could teach her. Like why he clearly resents Chloe’s wealthy background. And why he never shows his art to anyone. And what really lies beneath his rough exterior…

In a continent on the edge of war, two witches hold its fate in their hands.

Young witches Safiya and Iseult have a habit of finding trouble. After clashing with a powerful Guildmaster and his ruthless Bloodwitch bodyguard, the friends are forced to flee their home.

Safi must avoid capture at all costs as she’s a rare Truthwitch, able to discern truth from lies. Many would kill for her magic, so Safi must keep it hidden – lest she be used in the struggle between empires. And Iseult’s true powers are hidden even from herself.

In a chance encounter at Court, Safi meets Prince Merik and makes him a reluctant ally. However, his help may not slow down the Bloodwitch now hot on the girls’ heels. All Safi and Iseult want is their freedom, but danger lies ahead. With war coming, treaties breaking and a magical contagion sweeping the land, the friends will have to fight emperors and mercenaries alike. For some will stop at nothing to get their hands on a Truthwitch.

It should have been the perfect summer. Sent to stay with her late mother’s eccentric family in London, sixteen-year-old Joan is determined to enjoy herself. She loves her nerdy job at the historic Holland House, and when her super cute co-worker Nick asks her on a date, it feels like everything is falling into place.

But she soon learns the truth. Her family aren’t just eccentric: they’re monsters, with terrifying, hidden powers. And Nick isn’t just a cute boy: he’s a legendary monster slayer, who will do anything to bring them down.

As she battles Nick, Joan is forced to work with the beautiful and ruthless Aaron Oliver, heir to a monster family that hates her own. She’ll have to embrace her own monstrousness if she is to save herself, and her family. Because in this story . . .

The “ironborn” half-fae outcast of her royal fae family.
A tempestuous Fury, exiled to earth from the Immortal Realm and hellbent on revenge.
A dutiful fae prince, determined to earn his place on the throne.
The prince’s brooding guardian, burdened with a terrible secret.

For centuries, the Eight Courts of Folk have lived among us, concealed by magic and bound by law to do no harm to humans. This arrangement has long kept peace in the Courts—until a series of gruesome and ritualistic murders rocks the city of Toronto and threatens to expose faeries to the human world.

Four queer teens, each who hold a key piece of the truth behind these murders, must form a tenuous alliance in their effort to track down the mysterious killer behind these crimes. If they fail, they risk the destruction of the faerie and human worlds alike. If that’s not bad enough, there’s a war brewing between the Mortal and Immortal Realms, and one of these teens is destined to tip the scales. The only question is: which way?

Wish them luck. They’re going to need it.

Milly, Aubrey, and Jonah Story are cousins, but they barely know each other, and they’ve never even met their grandmother. Rich and reclusive, she disinherited their parents before they were born. So when they each receive a letter inviting them to work at her island resort for the summer, they’re surprised… and curious.

Their parents are all clear on one point—not going is not an option. This could be the opportunity to get back into Grandmother’s good graces. But when the cousins arrive on the island, it’s immediately clear that she has different plans for them. And the longer they stay, the more they realize how mysterious—and dark—their family’s past is.

The entire Story family has secrets. Whatever pulled them apart years ago isn’t over—and this summer, the cousins will learn everything.

This is what they deserve. They wanted me to be a monster. I will be the worst monster they ever created.

Fifteen-year-old Sloane can incinerate an enemy at will—she is a Scion, a descendant of the ancient Orisha gods.

Under the Lucis’ brutal rule, her identity means her death if her powers are discovered. But when she is forcibly conscripted into the Lucis army on her fifteenth birthday, Sloane sees a new opportunity: to overcome the bloody challenges of Lucis training, and destroy them from within.

Sloane rises through the ranks and gains strength but, in doing so, risks something greater: losing herself entirely, and becoming the very monster that she ahbors.

16 thoughts on “Authors I Haven’t Read, But Want To (Top Ten Tuesday)” 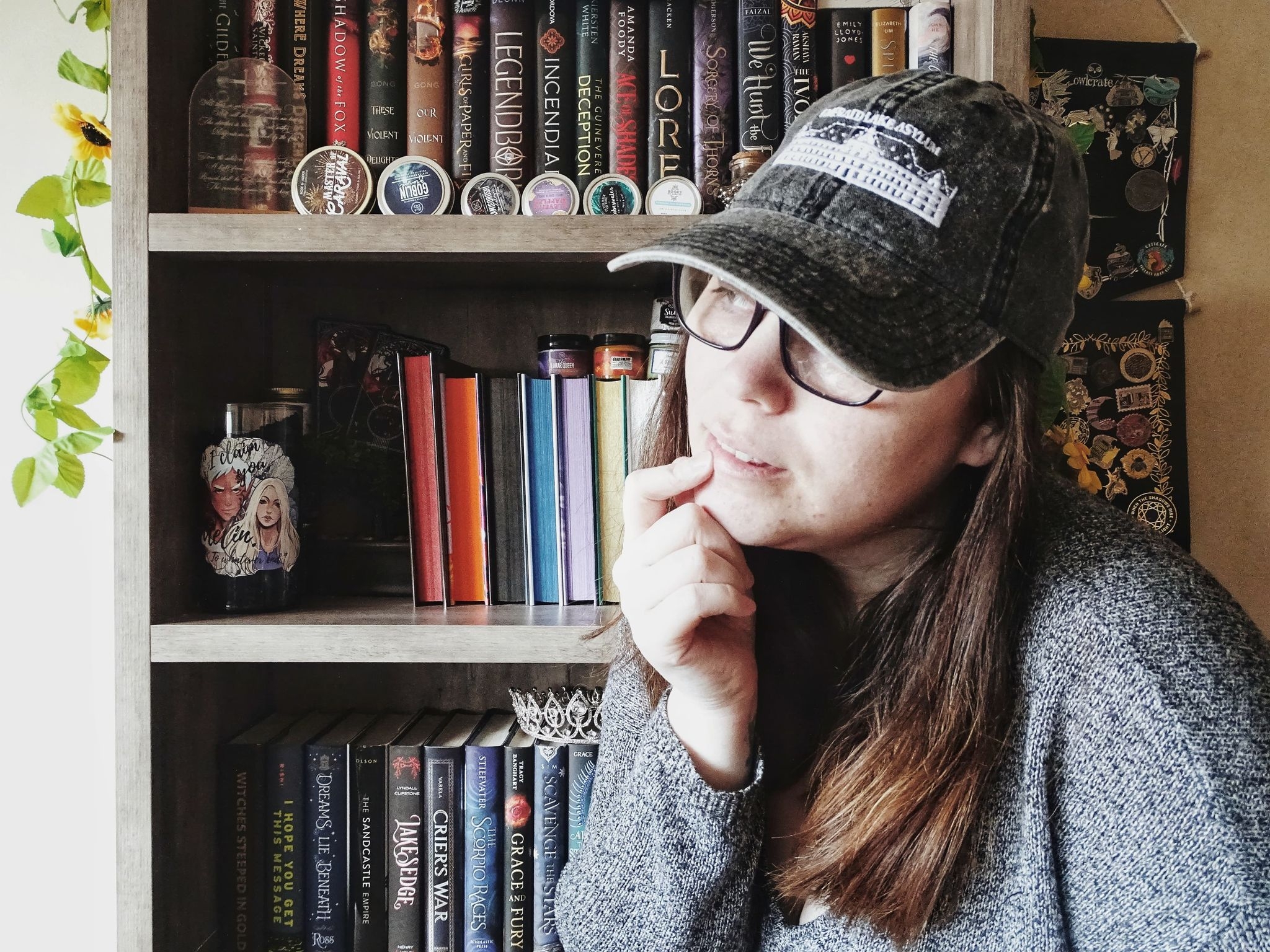 My name is Donna, wife, mother, booklover/booknerd from Canada.

Nice to meet you all!

Where motherhood is my reality and Books are my vacation!

🌻𝑸| What is a book you would read in the summer?
🌻𝑸| Can you name a duology you still need to finish?
🌻𝑸| What are your reading plans this weekend? or plans in general?
🌻𝑸| Have you read any books that you loved recently? If so, which books, and what did you love about them?
🌻𝑸| What are some unread books that you keep meaning to get to, but still haven’t?
🌻𝑸| What is your favorite season?